I was intrigued to drive through the small hamlets of Transylvania, each housing its own aging church surrounded by red-tiled roofed homes that have seen many years of change. It was a warm day and I think I was annoying the rest of the group in the van as I kept opening the window to take pictures. I was frustrated as we passed many great opportunities for photos. 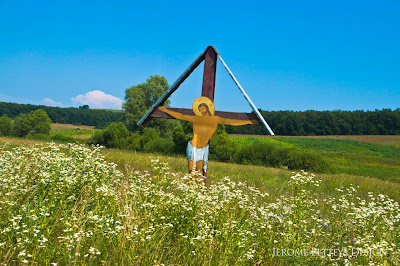 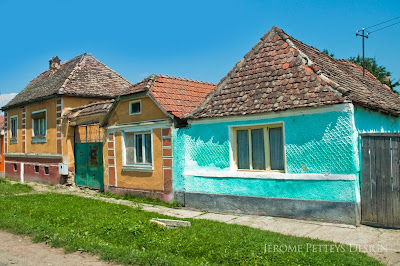 Petry, who led worship at the camp, joined our caravan mid-trip to lead us to our destination. As we drove closer, we spotted some of the kids we met last week at camp. Some were hanging out on a doorstep, another riding her bike along the road.

I was pleased when we finally reached the small village of Toarcla, a 35-minute drive from the town of Fragara. We were greeted by waving children and adults—Cosmin, Codrut and Costel were among them. All three of these guys were always upbeat and optimistic. Now, seeing the beauty of their town, I know why. 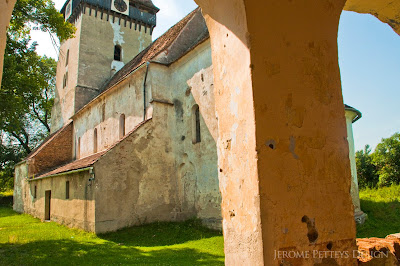 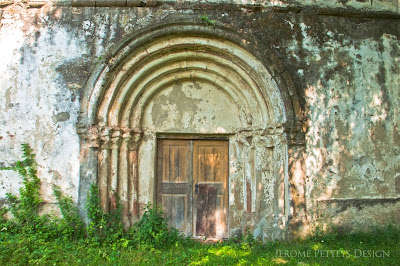 Petry took us through a gate and into the grounds of the German Evangelical Reformed Church. His church, Bethany Baptist, has mission points in the villages around the Fragara, Toarcla is one of them. We had the privilege to worship here with some of the families from the church as well as our three friends from camp. We were led through a portico, into a sunny room lined with benches that rested on aged hard wood floors. The room was very clean. In one corner was a stove, which I assumed provided heat during the extremes of winter. 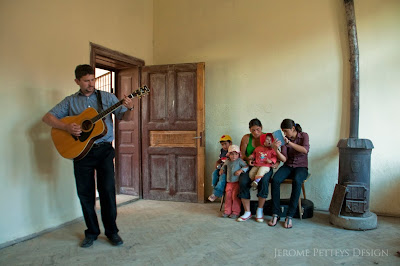 Petry was prepared with his guitar to sing songs, mostly in Romanian. When asked that we sing a song or two in English, most of us declined. However, I volunteered to sing if Petry would accompany me, which he obliged to do. The acoustics in the room and the simplicity of the outside wind and birds heard through an open window caused me to want time to stop. It was refreshing to not have the distractions of a busy city and neighboring cars.

After songs, we prayed and then took a tour of the church. The building is probably over 300 years old and definitely in need of repairs. Petry and his church have helped to assist with patching the walls and such. The main worship area and sanctuary has been well kept in pastels of yellow, green and turquoise. The organ that resides on the mezzanine seemed fantastic for such a small village and fit the color scheme. 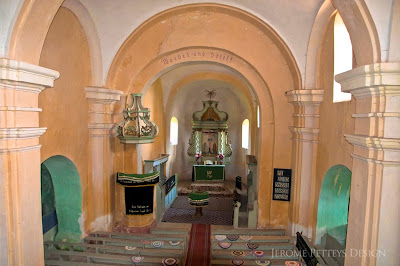 We climbed the rickety wooden stairs that led to the belfry. No finished interiors here. This was a great location for a movie. Kind to think of it, since we were in the heart of Transylvania, it was a great place for bats. Evidence of the critters were all around as I gingerly planted my feet as I climbed. This place would not pass inspection in the States. I was one step away from falling through the ancient floorboards. I enjoyed the experience. 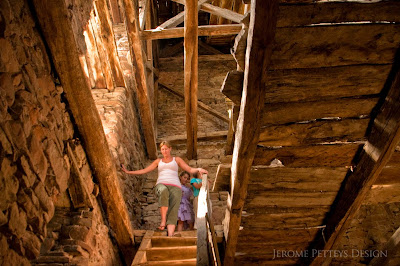 The view from the top was worth every risky step. It revealed the green and rolling countryside surrounding this sleepy red-tiled village. I tried to imagine what it was like living here at the time this church was built. What it would have been like to see approaching riders along the main road? Were all of these farms in use at that time? How different was this town back then? It was easy to imagine it as much the same. 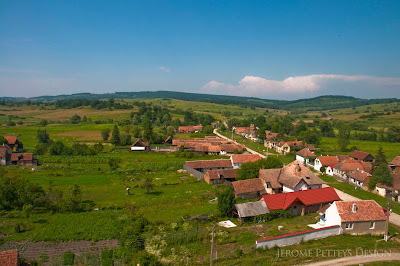 We waved goodbye to the church as we drove down the road to the homes of Codrut and Cosmin. Codrut had lost his father a week before we arrived at camp. I was impressed that he was so bold as to want to even attend camp. It tells a lot about his character. I entered his small home and was touched to see the place where his dad lay before he died. The bed was gone and in its place was his picture and flowers in remembrance of his life. 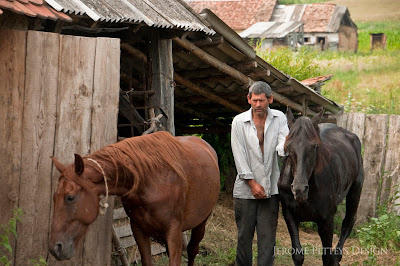 We walked across the street to the home of Cosmin, whom I observed all week to be solid in his faith. He displayed an air of leadership in all activities at camp and is someone I would like to have gotten to know better. I could tell he was anxious and proud to show us his home where he and his seven other siblings reside.

I believe Petry was going to take us on more visits but realized that we needed to be back at camp by 6:30 for a barbeque that Iulian was preparing for us. So we said goodbye to Toarcla and returned via the path we took in coming. I was sad to have left. I would have loved to spend a week in that town alone. Perhaps someday I will. 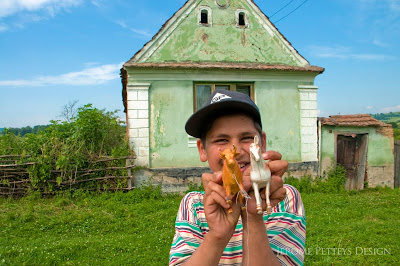 Camp of the Good Shepherd 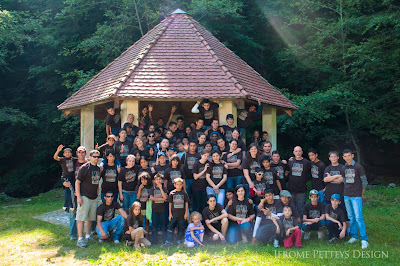 I've just returned from having the priviledge to travel to Romania for two weeks to assist at a weekly Bible camp. Camp of the Good Shepherd offers a week of respite for children in state orphanages and from poor villages while building a foundation of faith in Christ. Funded by Heart of Hope Ministries International, which in 1998 purchased land in this mountainous region of Transylvania, the camp changed my own heart during my two-week stay.

The first week was devoted to about 60 village kids from 8 years of age to around 18. Seeing their faces peer through the windows of the vans as they arrived set in motion months of anticipation. Their arrival removed any anxiety I had prior to coming. 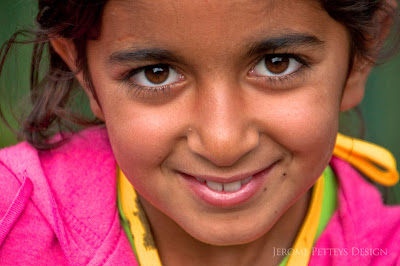 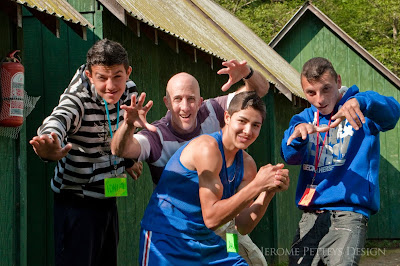 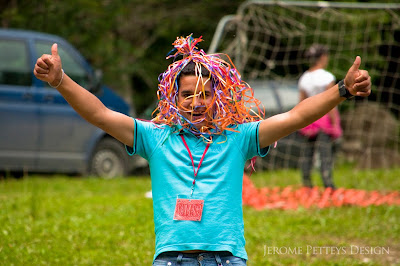 It proved to be a rewarding week as well as a trying one. It was rewarding to visibly see how important this week was to each an every kid and be a part of that. It was totally obvious they wanted to be there and that they knew we were there for them. Every night my mind would get carried away with thoughts and conversations from that day. Fortunately, each morning I awoke energized for the day ahead. It's been a while since I've devoted an entire day, let alone a week, without inserting my own needs into the mix.

I wasn't alone. In addition to our American team of eight, there was an awesome Romanian team that handled the Bible study and worship time and any interpreting needs we had, which were many. The week was structured with activities, games, small group time and meals--with the right amount of free time to just hang out.

The camp is situated in the mountains about 45 minutes outside of Sibiu, Romania. This probably means nothing to you, since it meant nothing to me. What was helpful was knowing I was in the middle of Transylvania. That I had hear of.

When I first arrived, coming from the Pacific Northwest, I was a little underwhelmed with the scenery. I've done green before. However, as my stay progressed I began to take in its beauty. A nice river runs through the property and provides a calming background noise as it snakes its way past the chalet-like main building, the soccer field and the kid's cabins. There, too, is always the sound of sing-song birds flittering around as they are usually ignored by the goings-on. Looking east there is a mountian with grassy patches reminiscent of Austria with its thatched haystacks.

Outside the camp gate, horse-drawn wagons would pass transporting heavy loads of hay along the dirt road to market. Only to be followed by a Dacia, driven by a local resident as he stirs up dust that would collect on the plants alongside the road. Along this road I passed one elderly man outside his home tending to his barking dog, for which I was thankful. I asked him for his photograph which he obliged with some hesitation. 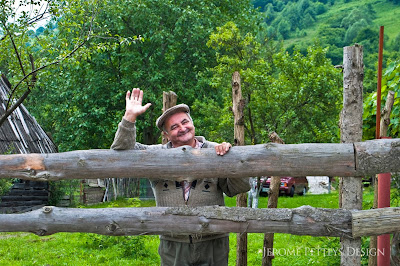 Posted by Jerome Petteys at 11:40 PM No comments: