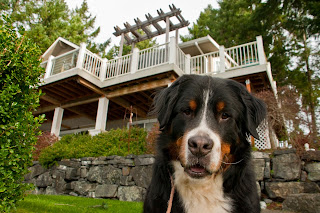 Good friends of mine asked if I would sit for their beautiful Bernese Mountain dogs, Murphy and Milo. What a hoot! I love these guys. I miss their company and personality. I found we have something in common, we both love our routine.

Now that I have had a taste for living in “The Harbor” (Gig Harbor), it’s going to be an adjustment returning to my own home without a view. The view of southwestern Fox Island is great. The house was like staying in a suite at a nice hotel.

Taking Murphy for walks along the beach was certainly a highhlight. Unfortunately, Milo’s hips won’t let him walk very far. In fact, he needs assistance getting to his feet. Poor guy! However, he has a great attitude about his situation. 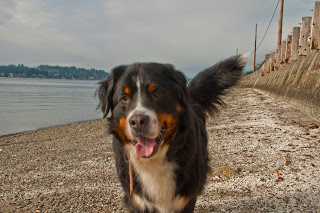 On my second Monday, the Northwest had a major windstorm in the evening. I had been to my regular Monday night Bible study in Tacoma--it had been windy all day--when I walked out of the church that night and found the wind to be much stronger. I stopped by my house on the way back to the Harbor to grab a few things. On the way, I noticed the flashing of downed power lines. In fact, as I drove across a dark Narrows Bridge, I noticed that my neighborhood was one of the few places with electricity in the north end of Tacoma as well as Gig Harbor.

As I drove back along East Bay Drive to my retreat in the Harbor, I was dodging fallen trees and limbs that littered the road. I needed my high beams to ensure there were no surprises on the road ahead. Crews are working along Wollochet Drive, causing a detour. However, this detour was complicated by a fallen tree. So my commute was lengthened to uncharted territory for me. I was following a crowd of other cars, hoping that everyone was going where I needed to go. It all turned out good and I happened on familiar ground. It wasn’t long before I was on the driveway to the house.

I stopped periodically to move fallen limbs aside so I could progress further to the house. It was apparent that there was no power in the area. I needed my highbeams to guide the way. I got about halfway down the drive and was stopped by a fallen tree. Not a small tree, but a tree that I needed to address. I considered just parking my car and walking in. After all, it wasn’t much further to the house. However, the thought of leaving my car exposed to the elements was not working for me. And, the idea of more trees and branches falling on my car was not a happy thought. It then dawned on me that I had been using the garage door opener all week and left the house key on the counter. How was I going to get into the house once I arrived?

When I arrived, Milo and Murph were barking, not understanding the situation. I thought it was a hopeless case getting into the house. I had my phone with me and texted people I thought might have phone numbers of people who could help. But no one was available. I then remembered hearing wind through a kitchen window that I just shut but not locked. I was able to shimmy my way through the window to the happy wags that awaited me on the other side. 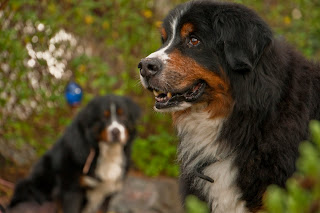 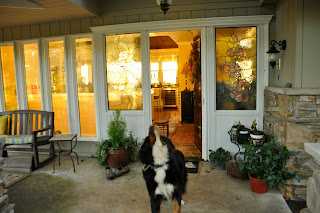 Posted by Jerome Petteys at 11:36 AM No comments: