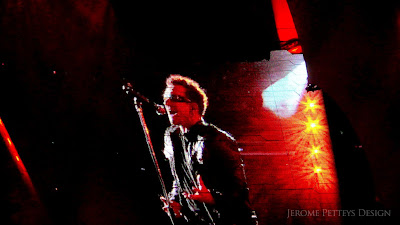 I had the honor to join a couple of friends to the U2 concert this past weekend. It's been a while since I had been to a concert. I know that I've been to one since, but the last loud concert I remember going to was Supertramp back in the early 80's at WAZZU. Friends that know me probably would have thought it would have been the Carpenters. My concert companions offered me ear plugs, but I chose not to use them. I kinda wish I had.

A side note: On the way to the concert I ran into Erin McClain, a friend from gradeschool thru high school. In fact, we grew up a block from each other in Fircrest. It was great to reconnect and catch up despite the time limitation and the abrupt end to our meeting. However, we were able to re-reconnect over Facebook. 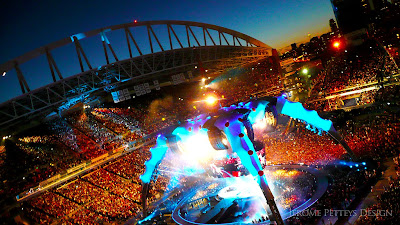 Quest Field was transformed into a huge, 360° Saturn-like boardwalk around The Claw (a transformer-esque spider shape). Rolling catwalks placed band members at different parts of the circular floor. The Claw structure above the stage looked fairly innocent until the music started, revealing an awesome light show.

The concert opened with Lenny Kravitz. I know I've heard of him, but for the life of me, I couldn't entertain any knowledge of the man. When I hear the name, I'm reminded of Mrs. Cravitz, the nosy neighbor on the television show Bewitched. Needless to say, I was anxious for U2 to show up.

Once they did, the heart of the show for me was a surprise video message from Commander Mark Kelly — from space! Kelly is the captain of the space shuttle Endeavour. The band dedicated the song Beautiful Day to his wife, Congresswoman Gabrielle Giffords. It was pretty emotional and probably my favorite song of the night.

Another thoughtful moment was a video of recently released Aung San Suu Kyi, who won Burma’s presidential election in 1990. Wrongly imprisoned under house arrest for nearly 15 years for her stance on democratic rights, she was kept from her rightful position as Burma’s leader.

Apparently, for over a decade, the group has been leading efforts that urged for her release. The video showed her speaking as a free woman, and was followed, of course, by “One.” 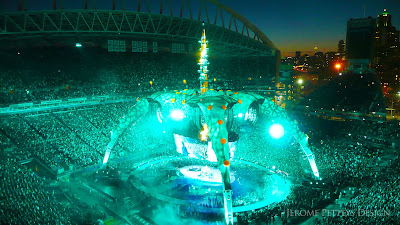 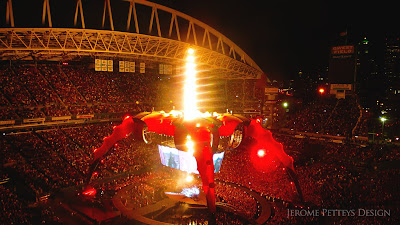 Posted by Jerome Petteys at 9:11 PM No comments: